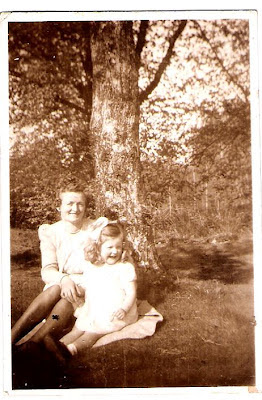 My mother and me back in the Good Old Days with Dad taking the picture.

A blogger consortium which blogs on a Friday every week had the topic of first memories for this week. And all are fascinating. If you want to check them out, feel free. Most of them are listed on my sidebar ~ Grannymar, Blackwatertown, Ramana's Musings, etc.

My first memory is totally clear to me. And I remember how absolutely flabbergasted my parents were when I brought it to their attention when I was about six.

I was under two and still in my pram.

It was just after the war (or "The Emergency" as it was called in Ireland) and petrol was rationed. So my mother and father and me would take to the roads to visit my grandparents in East Cork on Sundays when the weather was fine. It was exactly 6 miles from our town to the little village where my grandparents lived. My parents were enthusiastic bicyclists but were waiting for me to turn the magical age of two before purchasing a child seat for the crossbar of my father's bike (and those cycling trips I remember clearly also).

So there we were heading out the Youghal Road, my father was pushing me, I remember that clearly as he was a little faster than my mother and would whistle for my entertainment. My father, in those days, lived to amuse me, my being an only child for quite a while.

Next thing, he stopped pushing and was clutching his head and doing this absolutely crazy dance. I can remember laughing and laughing until I got the hiccups and had to be taken out of the pram by my mother and banged on the back until I could catch my breath.

Like I said, I brought this scene up with my parents when I was older.

As in "Why did Daddy do that dance in the middle of the road? It was so funny!"

They were totally gobsmacked I would remember a scene from my pram days that they had just about forgotten.

It turns out poor old Dad had been bitten by a bee and his forehead had swelled out in a huge bump and when he had calmed down, Mum had to get the sting out with her thumbs.

So the reality of NOT having a Fred Astaire as my daddy forced me to adjust that memory.

I preferred the singing, dancing and whistling Daddy.

Posted by Wisewebwoman at 11:44 PM