Of RIPs and Life

In the past week or so I have lost 2 long time blog buddies.

The first was Ann of Twilight. Learning Curve on the Eliptic was a fountain of knowledge on the stars, on politics and on life in general. I always enjoyed her posts.

Today, was the awful news that Ronni Bennett of As Time Goes By died last evening. She and I started blogging around the same time. Her honest reports on aging and insightful commentaries on its process was the first blog to deal with the "real" side of aging - with all its ailments, challenges and discomforts. I exchanged several emails with her over the years. She was an enormous help to her huge community and was unstinting in her communication about her own dying. Gawd how I'll miss her.

Highlights of the weekend:

Daughter came in and stayed for the weekend. We had planned to watch The Queen's Gambit together - me for the second time, she for the first. But that never happened as we laughed our way through Halloween and into the small hours of the morning. The more we age together, the more we enjoy each other but we also recognise that this is extraordinarly rare. One of the topics was rate your worst dates ever. Gawd did we have a feast on that one.

I'm reading "Catch and Kill" by Ronan Farrow. Which has my hair standing on end. It reads like one of the best crime novels, with underworld spies, threats, blackmail and dark web stuff but it's all true.

Please don't grieve that POS Sean Connery. A wife beater who bragged about slapping women about. A friend of Trump's and over all horrible subhuman.

Sean Connery "An open-handed slap is justified – if all other alternatives fail and there has been plenty of warning. If a woman is a bitch, or hysterical, or bloody-minded continually, then I'd do it." — Playboy magazine, 1965. "There are women who take it to the wire. That's what they are looking for, the ultimate confrontation. They want a smack." — Interview with Barbara Walters, December 1987

A dinner of moose was dropped off by a friend tonight. Here it is in all its glory. I will get 3 meals out of it. It is to die. 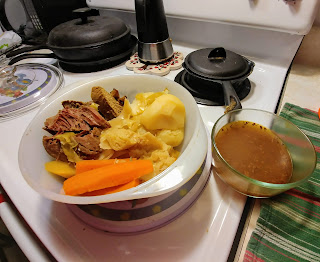 Posted by Wisewebwoman at 7:42 PM