By Their Boots Ye Shall Know Them 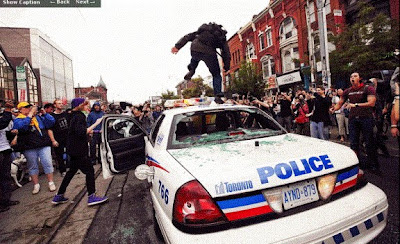 I promise I'll shut up about the G20 after this, which I wrote about here and here but finally, finally, as I suspected from all I read, the police provocateurs have been 'outed'. They are the much villified "Black Bloc" and used window smashing, fire starting, etc., to intimidate the genuine peaceful protestors.

Toronto is right now in the midst of a massive government / media propaganda fraud. As events unfold, it is becoming increasingly clear that the 'Black Bloc' are undercover police operatives engaged in purposeful provocations to eclipse and invalidate legitimate G20 citizen protest by starting a riot. Government agents have been caught doing this before in Canada

The undercover police were all wearing the same type of new police issue boot!

Read all about it here.

The public outcry is just beginning, there have also been reports of rape threats and inappropriate touching of a child by the police.

As Canada Day dawns I am ashamed of the scandal of the G20 which was funded to the tune of over a billion by us taxpayers. It is a sad, sad world when we cannot protest against the Theocorporatocracy that is trying to drown our voices even here in the supposedly "True North Strong and Free".

However, I am heartened that this police corruption is being exposed by We The People. What good will come of it I don't know. The police has the full force of the government behind them. We only have to look at the powerful lobbies, the true puppeteers, to see who will win this game.
Posted by Wisewebwoman at 10:29 PM