Helen Thomas. Heroine in our Time. 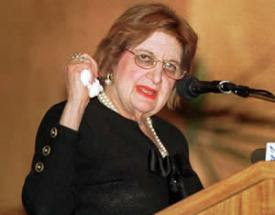 I applaud you, Helen Thomas!


For she speaks the truth. Always. Fearlessly. Without reservation.

The only member of the White House press corps not in the thrall of a corporate master.

For speaking the truth. Her truth, as she sees it along with millions of others'.

Helen Thomas, the 89-year-old superveteran of the White House press corps and a staunch liberal, has resigned days after a video was released in which she told an interviewer that Israel should "get the hell out of Palestine. Remember these people are occupied, and it's their land," and Israelis should "go home, to Poland and Germany."

I salute you, Helen Thomas, for speaking up in the press for over sixty-five years. In spite of the Bushes and all the other hawks who made your job so untenable. An honest job unlike the other corporate shills in the press room who dance to the tune of their puppeteers.

The US department of Disinformation is alive and well and forcing this fearless woman to apologise for speaking the truth.

Because, you know, the US and many other countries including Canada, does not want to address the appalling situation of Palestine and its relentless and continuing ethnic annihilation by Israel.
Posted by Wisewebwoman at 7:57 PM