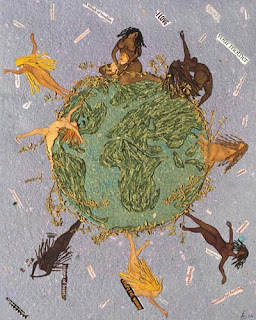 I was contemplating yesterday's earthquake here in Canada in Quebec and Ontario and grateful that it wasn't worse.

I remembered the one I felt in 1985. I was working on the 8th floor of an office building in Toronto and it was the weirdest feeling - as if everything was so fragile, as if all could collapse around me, just like that. It was over in a minute probably, but I can still recall the feeling: as if solidity was just an illusion we all carried around.

And recently I had this thought, this curiosity, about the oil and not just the leaks, ALL the oil we're syphoning from the bowels of Mother Earth for the past century, billions and billions of barrels, what then happens to her displaced layers as a result of the removal of all this oil?

I've studied a tiny bit about geology and physics in my time and I marched forth upon the interwebz and found, well, zero, on this topic. Is it gasses or air that fill the vacuum created by the expelled oil? I can see water from the ocean filling the void - but that could be disruptive to the tides, right?

Could this displacement of oil cause the tetonic plates to shift?

Will earthquakes and tsunamis increase?

So apart from the devastation of the used expelled gaseous oil causing cataclysmic climate change, we have the void left by the extracted oil causing upheavals in the earth's crust?

I would love to be more educated on this topic.

My good friend Government Funded Blogger kindly directed me to

which confirms my speculation on the topic. My question would be: Why isn't it addressed more by governments?
Posted by Wisewebwoman at 9:02 PM