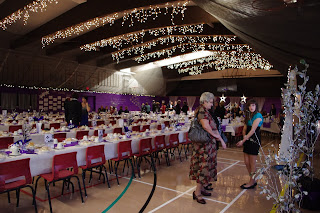 Before it all started.

I was a guest at a rural high school graduation last night. I had never been at such an event and perhaps won't be again. There were 26 graduates, amongst them 2 sets of twins.

Their beauty was breathtaking, both the boys and the girls - young men and young women facing their future, most already in university, some on waiting lists for colleges of their choice.

This was most definitely a community event. Apart from the grandparents and parents in attendance, all the local municipal mayors, the member of parliament and even the senator of the area was there.

I was stunned at the listing of scholarships: from the local firehalls, the legions, private citizens, townships, in memories of, etc. The school's graduating class average was in the top 10% of the province. No mean achievement.

The advantage of rural school education was made abundantly clear, the investment by the teachers in their students, often taking them in to their own homes at night to tutor and nurture. The hunting down of errant high school seniors, always located in the kindergarten room playing with the little ones. The series of projected photos of ALL of them as babies, as grade school students, in play, in study, on trips, all together from infancy.

It was joyful to see the capped and gowned students receiving their diplomas and scholarships and honours and then tossing their caps in the air before revealing their gorgeous dresses and suits.

One of the most moving moments came when two of the girls came on stage in all their finery, both sobbing but wanting to honour and talk about their mothers who had died in the past six months. Young mothers in their late thirties/early forties. Who should have had most of their lives ahead of them still. There wasn't a dry eye in the house. I can't imagine their pain. 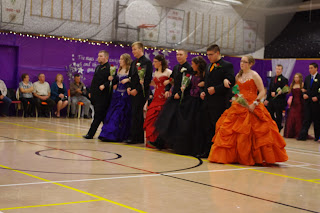 The finale (at least for the adults) came with the Grand March, which had all the students walking slowly in single file down to an arch at the end of the hall and then pairing off, to march down and loop around again, this time in fours, and so on up to eights. 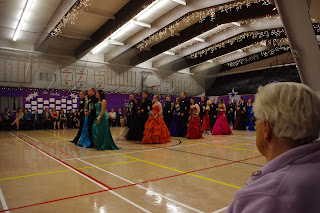 Notice how the young men's ties and handkerchiefs match the girls' dresses?

And then, oh my, lump in throat cubed, the graduates danced with their parents and grandparents. 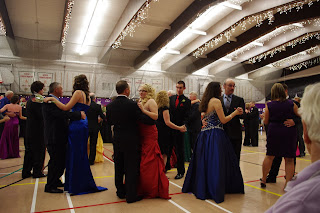 Posted by Wisewebwoman at 9:33 PM