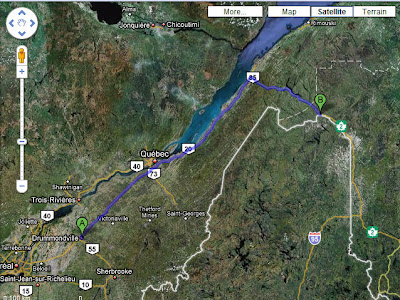 A distance of 455k covered today, most of it south of the mighty St. Lawrence river - a total of just over 1,100k in the 2 days I've been on the road so far. This part of New Brunswick is very French, I'm staying in a motel I've stayed in many times before which has a fabulous restaurant attached. Right in the middle of nowhere.

It was raining all day, ao I tucked in behind a Honda delivery truck for most of the distance. It helped through some of the mountains which had pea soup fog. Caused in no small part by this factory, Norampac 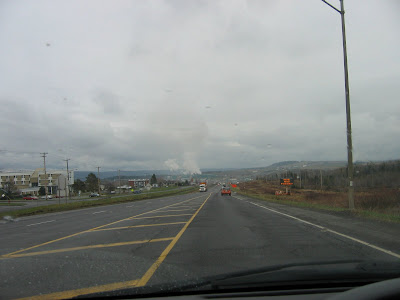 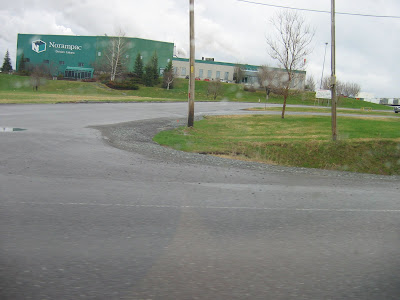 Road music were albums by John Denver and Cherish the Ladies followed by a CBC programme on how classical music influenced contemporary, like did you know that John Lennon came in one night and found Yoko Ono playing Beethoven's Moonlight Sonata and told her that was easy peasy so to speak, and to really impress him she should play it backwards. She did. And that piece of music is The Beatles' "Because".

I'm a good driver. My dog rides beside me and she says so. Here's proof: 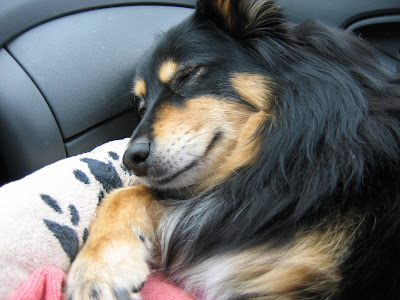 And here is where the French charm the pants off me: Dinner tonight was crepes. But oh what crepes. The older chef who moved like a ballet dancer. One crepe at a time he prepared: seafood, chicken, vegetarian, you name it, fresh grated local cheese top and bottom, fresh steamed asparagus laid just so on top, beauchamel sauce over, pasta pecan salad on the side. Dessert was the same but with chopped fresh fruit, custard, whipped cream AND double Devon cream laid on board like an artist's canvas. All there allowed me to speak my French and encouraged me greatly. Merci beaucoup, mes amis.

After this, the dog and I waddled a few miles up a wonderful converted railway track by the river in the rain and got into stride on the way back.
Posted by Wisewebwoman at 6:52 PM