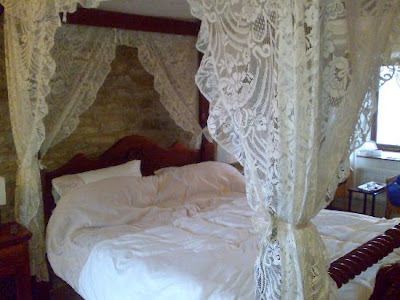 It is when I comment on Irene’s blog that I often get an idea for a post of my own. Out of the blue so to speak, I go off on a meandering track in my head and before I know it I’m in another place unrelated to what she has said. Like now. I was thinking of bedrooms in a comment I made on hers.

They say (and I really mean ‘they’ – I haven’t a clue where I heard this, maybe an interview on CBC radio) that we never quite leave the bedroom we had when we grew up for it is always somewhere in the psyche. That’s true for me.

I was the only girl in a family of five children for a long time. My long-awaited sister was born when I was nearly fourteen. Our house was tiny by today’s standards but considered the norm for then. A brand new semi-detached three-bedroom in a suburb of Cork, Ireland. The three-bedroom layout never made sense to me, given that the average family size in Ireland when I was growing up was six or seven children. One large bedroom where the parents slept, one medium sized (referred to as the ‘back room’) and one which was called a ‘box room’ which was 6’ X 6’. I do not jest. You could squeeze in a single bed and very little else. A small chest of drawers, perhaps. My wardrobe sat in the hall outside the door.

Still, I had the lap of luxury compared with others of my friends who had to share with sisters or kip out in the front parlour on a couch.

When my sister was born, bunk beds were squashed into the little box room. It was still luxurious as my four brothers had two sets of bunk beds and a lot of ‘aggro’ in the back room.

Since then, I’ve had various bedrooms, some vast in scale, for example one that my ex-husband and I made into a library with a fireplace and a king-size bed that could accommodate kids, dogs and cats with room to spare. Palatial. But also a little scary to me. All that wide open space never felt homey or safe. For the bedroom I feel most comfortable in is in a small one, not quite a 6’ X 6’ but a 9’ X 9’.

That’s my bedroom of today. Rather excellent high thread count sheets and pillows, a glorious duvet, a window that opens to the sea air, a chest for clothes at the end of it, and books piled on the two night-tables. A good reading lamp. Nothing more. Nothing less. And a blessed dog to guard me while I sleep.

I wouldn’t trade it for the Taj Mahal. (On second thoughts, maybe for a couple or four or one of Grannymar’s Toyboys?)

What about your bedroom?
Posted by Wisewebwoman at 9:56 PM