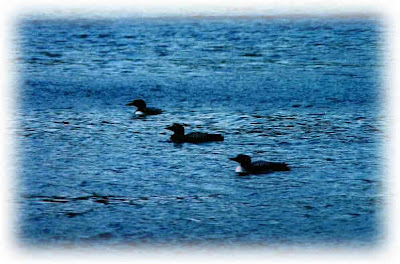 It is extraordinary what I can see through my office window. In the water today, the seals bob up and grin and disappear under the water again.

Ah, there's lots of fish out there obviously.

Next, nearer the shore, there are the loons. Three of them hang out together all the time. I wonder at this arrangement they have made. Loons are normally in pairs. One must be a widow then, or a widower and the others include her in their soft shoe paddles around the bay. So she's not too lonely.

On the shore, the gulls congregate, grabbing at the leftovers washed in by the tide maintaining a respectful distance from the loons.

On my front lawn the robins gather around the feeder as the ravens (who aren't aware that they're so much bigger) await up in the trees on their leftovers.

On the deck are the blue jays hopping around just for the hell of it.

Pacing up and down at the sides of the house, ever watchful, are the juncoes, like security guards, pecking at the odd worm, seeming to march in step with each other.

And they all have their own sounds and allow each other the time to chirp and crawk.

Us pathetic humans could learn so much from all these accommodations. None of these birds get into conflict. Ever.
Posted by Wisewebwoman at 11:58 AM