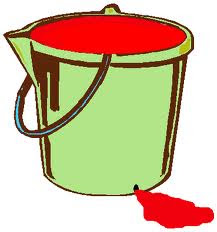 I was over visiting at Stan's place when a memory I had submerged was triggered by his wonderfully humourous post on the nature of mergers and corporate madness.

And I am delighted to report that I started laughing at this memory until I wept. I can see all the characters so clearly still and the pompous pricks around the boardroom table and the one truth speaker being ignored.

I was the controller at a plant that made incredibly boring parts for roadways. The parts that held the concrete in place. The underpinnings if you will. I just wiped out my more specific terminology for such items as I realized this might breach some privacy concerns.

In the eighties, Toronto was busy with its suburban sprawl, so busy, that our plant was working three shifts a day to keep all that gear flowing out the door to meet the demands of sixteen lane highways being constructed.

Of huge concern to the self-important Health and Safety Committee at the plant were the frequent small fires breaking out on one of the production lines. They called many meetings to address the situation and had experts in to examine the production line in detail and to micro-manage the workers as they went about their duties, with no solution.

One of these workers was Seamus from Achill Island and Seamus and I had become friends and spoke to each other "As Gaeilge" ("In Irish") as he was a native Irish speaker and I had a lot to learn from such a man.

On the fifth such Health and Safety Meeting, they called in the line superintendent himself, my pal Seamus. The door of the boardroom was left open and as I had the office next door to it I was privy to what went on at the Seamus portion of the meeting.

C(ommittee)"All these fires, Seamus, maybe you can, ha-ha, throw some light on the subject?"

S(eamus)"Well, I brought up many times how the buckets the laminate is decanted into need to be replaced?"

C: "Seamus, this is no time to be bringing up that petty grievance, we will pay attention to the buckets when this crisis is behind us."

C: (patronizing, impatient)"Seamus, Seamus. The health and safety of the plant and its people is the utmost priority at the moment, please leave the matter of the buckets with the plant shift supervisor where it belongs."

C (huge sigh): "That is all Seamus. Please remember in future that these meetings are no place for your petty grievances. That.Is.All. Go back to work."

S (passing my office, sticking his head in and winking and saying loudly, in Irish, to me: "They can all kiss my arse so. The aul bloody buckets are full of pinholes and they're leaking bloody plastic on to the burners and catching fire. They need to repair or replace the buckets!"

He was right. It took another two meetings and more experts to determine this, of course.

He was never given credit for his diagnostics.
Posted by Wisewebwoman at 8:10 PM