Having Sex with Twelve-Year-Olds 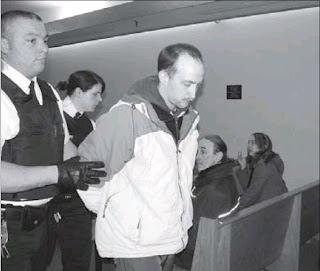 Man who had sex with 12-year-old jailed

So goes - just the headline, mind you - in our newspaper, The Telegram, today.

Is there anyone else out there who gets enraged with those few words in bold black ink?

'Had sex' implies consent, does it not? It implies two adults agreeing to have sex with each other, right? Consensual sex.

It implies a twelve year old child can agree to have sex with anyone she chooses. It implies she is a fully functioning adult who can make adult decisions with regard to sex. But not vote, or drive a car or get a job or live on her own.

And the news story gets worse:

“ There was no overt violence,” Judge Robert Hyslop said during Skanes’ sentencing at provincial court in St. John’s. “(But) this was an intrusive act that caused (the young girl) psychological damage.”

As Skanes was escorted out of the courtroom in handcuffs, his wife, as well as members of the victim’s family, sobbed.

Skanes showed no reaction, only to hang his head.

The St. John’s man pleaded guilty to one count of sexual interference. A charge of sexual assault was withdrawn by the Crown in exchange for the guilty plea.

Skanes admitted having sex three times with the girl between April and June last year, when he was 25 years old and she was 12.

The two first began flirting on a computer instant-messaging program before beginning a sexual relationship.

Skanes told the girl to keep it a secret.

They used a condom each time they had sex, but the third time, the condom broke.

That caused a pregnancy scare for the girl, who went to Planned Parenthood to get tested.
“Fortunately,” the judge said, “she didn’t get pregnant.”

Crown prosecutor Heidi Wells had recommended a two-to threeyear jail term, pointing to the victim’s young age and Skanes’ lack of insight into the seriousness of the crime.

A pre-sentence report deemed Skanes a medium risk to reoffend, saying he seems to have distanced himself from what he did and fails to acknowledge he should not have done it. Instead, Skanes continued to point out that other adults knew about the relationship and didn’t do anything.

I can parse some of it here before I get too queasy. I leave the rest of the report up to you to sort out.

“ There was no overt violence,” said Judge Robert Hyslop

And Judge Robert, sir, what would be overt violence in your little law book? Would you say this about your 12 year old daughter if she had been thus raped and violated?

"beginning a sexual relationship". Again this implies consent on behalf of the child. A "relationship" originating in stalking by a paedophile of a child through messaging on the computer.

The words RAPE, PAEDOPHILE and PREDATOR were not used once in the whole article.

And oh yeah, he got two years. His wife wept as he was hauled off.

Rape and paedophilia apologia is alive and well and supported by the media.
Posted by Wisewebwoman at 2:41 PM