H is for Hag 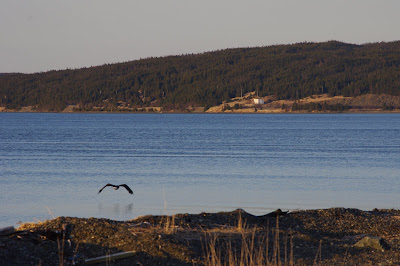 {An eagle over the water at my front door.}

A three-letter word with so many definitions:

hag1 n [phonetics unavailable]. Cp OED ~1 1 c obs (1632, 1696) for sense 1; OED hag-ridden 1, EDD hag sb1 2 (4) hag-ride esp Do So D Co for comb in sense 3. See D Hufford, 'A New Approach to the "Old Hag" [Nfld], 'in WAYLAND D HAND American Folk Medicine (1976), pp. 73-45.
1 The nightmare; freq in form old hag. Cp DIDDIES.
1896 J A Folklore ix, 222 A man ... told me he had been ridden to death by an old hag, until a knowledgeable old man advised him to drive nails through a shingle, and lash it to his breast when he went to bed. [1929] BURKE [6] "No Short Skirts": For her skirts are so tight round the hips, Jennie, / It's no wonder she got the old hag. 1924 ENGLAND 216 A sufferer from nightmare is supposed to be ridden by something called 'the old hag,' and the only way to free him from torment is to call his name backward. 1937 Bk of Nfld i, 230 Nightmare is called by fishermen the 'Old Hag.' T 222-66 Well, by this time it would be bedtime, and perhaps after such an exciting day you would probably have bad dreams; in fact you might have the old hag, or a nightmare. C 69-22 He often gets the hag. Usually he is dreaming that someone is chasing him [or] he may be falling from somewhere. C 70-23 If you sleep on your back you'll have hags. 1975 Evening Telegram 20 Dec, p. 3 Christmas for many has moved beyond the yearly sufferable nightmare to the realm of that particularly exquisite nocturnal terror called, in Newfoundland,'The Old Hag.'
2 Part of inner organs of a lobster, discarded in eating (P 127-73); OLD WOMAN.
3 Comb hag-rode: (a) troubled by nightmare; (b) bewitched (see P 51-67 quot).
P 213-55 Hagorid: [afflicted by] a nightmare, especially one in which the victim feels someone sitting on his chest. P 51-67 When he couldn't catch any fish, he said he was hagrode. C 67-10 ~ [Hagrode is when] she awakes in a sweat and feels pinned to the bed by some unseen force.

The Old Hag is well known here. She's rude and intrusive and visits you on the darkest of nights and strikes you down with fear and terror or can 'ride you to death'. And, according to folklore, very soon after her visit you will die. She's a first cousin to the Banshee.

Now I'm familiar with the Banshees of Ireland, I was bred and buttered in the stories of the Banshee who came visiting all the strong families whose surnames began with O'. These were the clans who stood up to the British occupation of Ireland and refused to “take the soup”, drop the O' and convert to Protestantism in the times of starvation and persecution.

The Banshee's visit foretells a death too. But only the death of another O' holder. And I'm here to tell you, as Maude is my judge, that on the night of my mother's death, proud O'Sullivan Beara she, the Banshee visited me.

Today's post brought to you by the letter H in partnership with the rest of the alphabet begun here.
Posted by Wisewebwoman at 1:00 AM