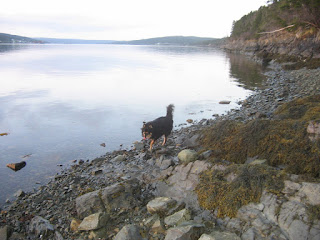 “Oh, she's after going upalong.” I've heard this expression here in Newfoundland with regard to someone leaving for “Canada” (=mainland) or the USA. In the same way one might say “Here be dragons”. An unknown territory, shrouded in dangers and temptations. I had written a short story in the past year pertaining to my home city of Cork, much of it based on truth but fictionalized by me called “Downalong”. So maybe I should consider writing a story about Upalong and then it would be a matched pair.

And of course, as given by the definition below, there were many clashes between the upalongs and the downalongs. The human species being what it is 'n all. No surprises there, h'm?

upalong av Cp EDD up 2 (3) upalong (a) 'a little way up the street or road' Ha IW Do So D Co, ADD ~ Mass for sense 1; EDD 2 (3) (b) [to the east of a county] Ha for sense 3.
1 Away from a person or locality; to or on the mainland of Canada or the United States.
1919 GRENFELLI 226 So Trader Bourne ... put to sea one fine afternoon in late November, his vessel loaded with good things for his necessitous friends 'up along.' 1931 BYRNES 45 [on Regatta Day] all roads led to the 'pond' and the crowds from 'up along,' 'down along,' and 'in along' on 'shanks mare' or lolling luxuriously in a closed carriage from the 'stand' left dull care behind. T 70-641 And they pulled ashore right up, and enquired from all the boats up along. T 169/212-651 Don't suppose we'll ever meet again and you be going upalong now, and we down here. 1970 Evening Telegram 11 May, p. 3 They say there are from 8,000 to 10,000 taking off upalong each year. C 71-106 If we visited neighbours who lived some distance from us, we said we were cruising upalong. 1976 Daily News 2 Nov, p. 2 Local management is not in charge, he says, and 'someone upalong is directing the scene.' 1976 MURPHY 114 I like to think that in his early days going to this school, Mike, a 'Down-Along,' as east enders were called, often met and conversed with (or perhaps fought with) that boy from 'Upalong,' Johnny Dwyer from the Cross Roads (also born in St John's in 1845) who later became professional heavyweight boxing champion of [America]. 1980 Evening Telegram 4 Oct, p. 6 I don't see why our Brian [Peckford] is getting so upset with the boys upalong just because he doesn't think it's a good idea to give our oil away.
2 Hence, upalong n: resident farther inland, or one to the south in a settlement.
1931 BYRNES 120 Who can forget the traditional 'scraps' between the 'upalongs' and 'down-alongs'? Heaven help the unfortunate youth found alone in the other fellow's territory. 1976 MURPHY 32 But the clashes between the 'Down-Alongs,' the boys of the East End, and the 'Up-Alongs,' the boys of the West End, that were in being in the sixties, seventies and eighties were reminders of the old faction fight days.


Today's post brought to you by the letter U from The Dictionary of Newfoundland English in partnership with the rest of the alphabet beginning here.

Posted by Wisewebwoman at 2:00 AM