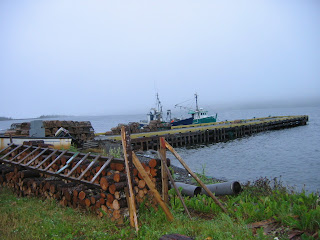 
Sometimes the most miserable of things are given the most glorious of names. I mean look at this:


tuckamore n also tuckamil, tucken-more, tuckermel, tuckermill, tuckermore DC ~ Nfld (1895-). For tucken-more, see TUCKING BUSH and MORE n. See also TUCK2. (a) Small stunted evergreen tree with gnarled spreading roots, forming closely matted ground-cover on the barrens; also attrib; (b) collectively, low stunted vegetation; scrub.
1863 MORETON 31 Tucken-mores. Small low-grown shrubs and creeping plants. 1866 WILSON 37 In the hollows are the tuckermore bushes, which is a dwarf juniper, with strong branches at right angles to the stem, and closely interlacing each other: the tops of these bushes are level, as if they had been clipped. To walk upon these tuckermores, or penetrate their branches, is equally impracticable. 1868 HOWLEY MS Reminiscences 9 The country is nearly level with scarcely any woods except occasional patches of tucking bushes (Tuckamores). 1891 PACKARD 84 Half-way down, as [the vale] widens out, [it becomes] choked with a stunted spruce and fir growth, or what the people call 'tucking,' or 'tuckermel-bush.' 1895 J A Folklore viii, 39 ~ , in some places tuckamil, a clump of spruce, growing almost flat on the ground and matted together, found on the barrens and bleak, exposed places. Ibid viii, 288 I drawed down to the tuckamores aside the pond and got twict thirty and varty yards from un. I lets drive and the loo' dove. 1919 GRENFELL2 229 He had gone through his snow racquets and actually lost the bows later, smashing them all up as he repeatedly fell through between logs and tree-trunks and 'tuckamore.' 1927 RULE 70 Travelling alongshore between Bonne Bay and Cow Head, I sometimes used the sloping surface of tuckermill as a couch to rest upon. 1970 Evening Telegram 21 May, p. 3 We proceeded as usual to the Witless Bay Line ... and from thence some 13 miles on foot in over the tuckamores. C 70-12 Tuckamore is a sort of low bush which grows in the marshes and in the small valleys. It is in the tuckamore that the path of a rabbit is most likely to be found. 1971 NOSEWORTHY 258 Tuckamoors or tuckamoor trees [are] low bushes on the barrens, about knee-high. 1981 Evening Telegram 17 Oct, p. 8 A good (and bad) cross-section of ptarmigan habitat (i.e. prostrate balsam, tuckamores, high plant or shrub cover, open tundra, rock exposures, marshes, etc).


Yes, we're talking about a stunted little shrub.. Growing all over the barrens here. I guess what throws me off is the “more” attached to it. “More” in the Irish language is “big”. So when I first heard the term “tuckamore” I envisioned enormous trees. Far from it.

Try as I might, I can't find the origin of the name. But I note that there is a Tuckamore Lodge, along with a Tuckamore Chamber Music Festival and even a Tuckamore Capital Fund here.

A great word, not living up to expectations by any stretch of the imagination.

Today's post brought to you by the letter T from The Dictionary of Newfoundland English in partnership with the rest of the alphabet beginning here.


Posted by Wisewebwoman at 2:14 AM