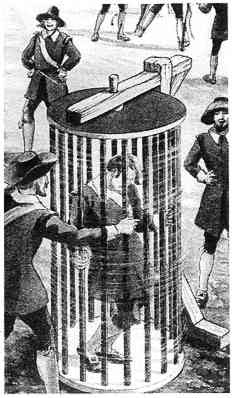 Miss Eleanor Moody's crime was to be "a Nuisance to the Publick". How, we may speculate. In 1757 she was charged and sentenced to an hour in the whirlygig where she was to remain for an hour "to be properly punished" and from there to be "sent out of this island". Presumably back home to Ireland.

The whirlygig was a primitive instrument of torture. One would be whirled in a cage until one vomited. I've seen these types of apparatus at Disneyesque fairs, where one pays for the privilege of being nauseated and actually begs them to take one's money for more.

Here is the Dictionary of Newfoundland English definition:

whirlygig n OED whirligig sb 2 (a) 'instrument of torture' (1477-1623). Revolving cage in which offenders are placed for punishment.
1757 PANL GN/3B 1 Oct ... cause the Constable to apprehend the said Eleanor Moody, & to put her in Prison 'till 4 o'clock in the afternoon, at which time to cause her to be put in the Whirlygig, where she is to remain One Hour, & to be properly punished, & to be sent out of this Island the first Opportunity, being a Nuisance to the Publick.

And here is the very slender Wikipedia entry. I note they used it to torture women in Tangiers.

And for any movie buffs out there, wasn't "whirly-gig" in old movies the original name for helicopters?

Today's post brought to you by the letter W from The Dictionary of Newfoundland English in partnership with the rest of the alphabet beginning here.

Posted by Wisewebwoman at 2:00 AM