K is for Killick 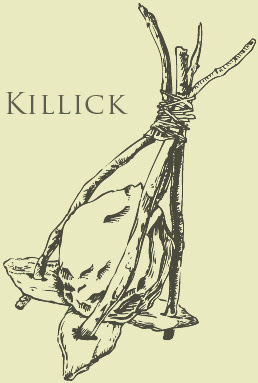 I've seen killicks, the odd time, scattered in sheds, lost in the grass, tied to a lobster pot. Some who still use them swear by them as handy and quickly made anchors.

Here is the definition from the Dictionary of Newfoundland English:

killick n also keel-log, kellock, keylock*. G. Pulman, Rambles, Roamings, and Recollections (London, 1870) p. 135 kellick 'local name [in Lyme Regis, Do] for the stone used as an anchor for fishing boats'; Anglo-Manx Dialect 98 'In oul' times the boat would be anchored with a wooden kellagh that had a big stone in it to sink it'; AND kellick (1867-1962); Burton Bradstock, Do 'large stone picked off the beach used as an anchor'(P 304-90).
1 1680 CO 1/45 (68i), 252, v 'They launcht a new shalloway from the Adm[ira]lls place & put the rest of theire provisions into her & moord her with 2 keylocks.' 1688 CO 1/22, 66 [The English fishermen upon the ledges] for feare of being surprized (not then knoweing what the shipp really was) weighed their killicks and came into harbour. 1832 MOSS MS Diary 20 Apr Capt. Frederick and myself walked down to the Killick stand. 1836 WIX 82 We came to ice, at the edge of which persons were engaged in boats, fastened to the ice by keel-logs, catching codfish. 1981 SPARKES xv Then 'kellock' or 'killick'...was a simple, home-made anchor for nets and, sometimes, for small punts. 1983 Gazetteer of Undersea Feature Names 104, 105 Kellick Shoal, Killick Ledge, Killock Shoal. 1987 O'FLAHERTY 50 At Ferryland he was given a large replica of a killick, made by a local craftsman, to take back to St John's.

You can see that the word was born of the Anglo-Manx Dialect. And I note there is a reference to Kellagh in the definition. And that made me pause. I've no idea of the origination of the name of the town of Killeagh, in East Cork, Ireland, but the similarity is striking. Digging around in the muck of the interwebz I come up with this:

Churches and rocks! For upon this rock....etc! Good enough a connection for me.

I go through Killeagh most times when I am back in Ireland and visit the land of my forebears in East Cork. For here, 70 years ago this year, is the church where my parents were married.

Today's post brought to you by the letter K from The Dictionary of Newfoundland English in partnership with the rest of the alphabet beginning here.
Posted by Wisewebwoman at 1:00 AM