S is for Slipper Skipper 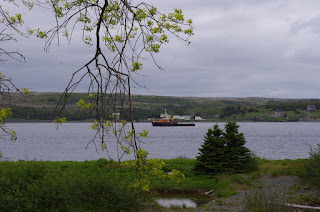 Boat on the Bay, outside my front door.


OK. So this term is not quite in the Dictionary of Newfoundland English. I think the dictionary needs to catch up with local useage. I've heard the term used more that a few times to recognize it's validity.

How on earth, you may ask, can these two words be linked?

Allow me to tell you.

Slipper skippers are those who never darken the doorway of a wheel house on a ship or haul in a catch in their nets. They can even be so far from the ocean as to make the term “dry dock” refer to a sober physician.

No, they stay completely housebound. They may own the boat but all on board don't report to them, and may never even see their slipper skipper for these skippers never go to sea. A figure head only. To front for the real skipper, for whatever reasons. It wouldn't be wise to ask.

But boy, what a mess at tax-filing time.

I'm worth every penny.

Today's post brought to you by the letter S from The Dictionary of Newfoundland English in partnership with the rest of the alphabet beginning here.
Posted by Wisewebwoman at 4:08 PM