O is for Outport 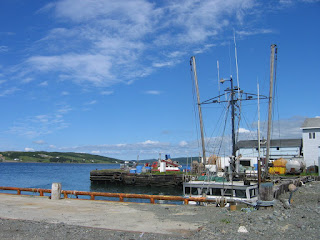 I forget sometimes. I use outport so casually in writing and conversation. You see I live in one. An outport.

A word so descriptive and well quite beautiful and perfect that I feel no explanation should be necessary. But it is, as I am continually surprised to hear. A word that is uniquely Newfoundlandese. We are othered, if you like. Outside the norm. Not part of the in-crowd. I love this bit by the dictionary, emphasis mine:

“The systematic encroachment on the ships' fishing-rooms, so much complained of by the authorities in St John's, were still more rife in the outports, the innovators being probably encouraged by their distance from the notice and correction of the government.”

Well I can attest to that notice and correction bit. No high speed broadband or optic fibre for us. We are beneath the notice of said "inported" government. And there will be no correction.

outport n [phonetics unavailable]. Cp OED ~ 1 1 'term including all ports other than that of London' (1642-); DC 1 Nfld (1820-). A coastal settlement other than the chief port of St John's; OUT-HARBOUR. Also attrib.
1810 STEELE 94 Some few years since, four or five [native Indians] were discovered in a wigwam, by persons who were on the search for them, from an outport. 1842 JUKES i, 25 ... the recent establishment of schools in the outports. 1863 PEDLEY 257 The systematic encroachment on the ships' fishing-rooms, so much complained of by the authorities in St John's, were still more rife in the outports, the innovators being probably encouraged by their distance from the notice and correction of the government. 1887 Colonist Christmas No 2 And, after all, there is nothing but what is quite natural in this great love of Christmas among our outport people, for it is only then that the fisherman can safely say that his summer's toil is over. 1900 PROWSE 116 Outport pilots demanding a greater sum than rate, or accepting a lesser sum. 1907 DUNCAN 113 I'd be a Newfoundlander, outport born, outport bred, of outport strength and tenderness of heart, of outport sincerity, had I my birth to choose. [1909] 1930 COAKER 8 The Inspector of Cullers to be appointed by and responsible to the Department of Marine and Fisheries, and should be an Outport Planter. 1919 Journ of Assembly 314 The third suggestion, Outport Hospitals, is one that has been discussed for some time... I am strongly in favour of a ten-bed hospital conveniently situated in each of the principal bays. 1941 DULEY 74 One of the larger outports, Ship Haven looked as if the sea had bitten the land with a horse-shoe mouth. Scattered widely, the settlement seemed lifted to stare at the sea. 1950 HERBERT 255-6 But if you come in from the sea to any of the innumerable fishing villages (or 'outports') on a sunny day, you would say you were in Norway, or Cornwall. T 43/7-64 But in the outports now, if you're goin' into a house, in the back entrance, the first thing you'll see is a birch broom. 1976 CASHIN 48 Also many of the outport dealers, planters or merchants operated their own coastal schooners or boats, which were continually coming to St John's for additional supplies of all kinds.

And oh, yeah, there is a noun for me too. I am an outporter..

Today's post brought to you by the letter O from The Dictionary of Newfoundland English in partnership with the rest of the alphabet beginning here.
Posted by Wisewebwoman at 2:00 AM